King of Malaysia Sultan Abdullah Ri'ayatuddin Al-Mustafa Billah Shah said in Turkish at the ceremony, "I came to visit Turkey. At the same time, the title of 'Honorary Doctorate' of Marmara University is very important to me. Thank you."

Speaking at the ceremony, Vice President Fuat Oktay congratulated King Sultan Abdullah Shah, who received the title of "honorary doctorate" for his contributions to bilateral relations between Turkey and Malaysia. Stating that he hopes the title of "Honorary Doctor of Political Science and International Relations" will bring new dimensions to the deep-rooted relations between Turkey and Malaysia, Oktay said that Malaysia has a very special and exceptional place for Turkey among Islamic countries and Southeast Asian societies; and  added that they had the opportunity of wider cooperation with the negotiations and agreements signed within the framework of high-level visits;  especially on the occasion of this visit, which is  an official meeting at the highest level after almost 30 years.

Oktay also said, "Malaysia has a serious cooperation potential with its multicultural structure, economic dynamism, political stability and perspective that is open to the world. Education and especially higher education offer important opportunities to establish the friendship, affection and solidarity between Turkey and Malaysia at the maximum level. We are following with appreciation the steps taken by the university in the field of education in the last 30 years. It is a fact that this educational infrastructure is behind the economic success of Malaysia and the social peace that exists in the country. In this direction, we support the cooperation of our universities with higher education institutions in Malaysia in the strongest way. I think there will be a touchstone here.”

Oktay stated that they encourage the academics of the two countries to come together to exchange views on various fields, including the fight against Islamophobia.

Speaking at the ceremony, CoHE President Prof. Dr. Erol Özvar, on the other hand, thanked King Sultan Abdullah Shah for his contributions to Turkey-Malaysia relations and said, "Turkey maintains a policy towards ensuring stability in the world and in the region. I would like to state that as the  CoHE President, we encourage academic and international relations. Their knowledge, experience and experiences are different. We also support intercultural cooperation by moving it to different geographies." Expressing that Turkey has opened its doors to all talented students and academics in the world by creating a quality and competitive education system, Özvar stated that thousands of students from all over the world are provided with education opportunities in Turkey, and many foreign students benefit from Turkey Scholarships.

Marmara University Rector Prof. Dr. Mustafa Kurt explained in his speech that the university is one of the most respected academic institutions in Turkey with its 140-year history. Stating that they gave the title of "honorary doctorate" to the King of Malaysia, Sultan Abdullah Shah, for his contributions to world and regional peace, Prof. Dr. Kurt said, “Today, we are here to confer the title of Honorary Doctor of Political Science and International Relations to His Majesty the King of Malaysia, Sultan Abdullah Ri'ayatuddin Al-Mustafa Billah Shah, to express our appreciation and gratitude for his contributions to regional and world peace. Throughout history, Turkey and Malaysia have maintained friendly relations despite the distance between them. There is no doubt that the joint contributions and efforts of our Honorable President Recep Tayyip Erdoğan and His Majesty the King have greatly contributed to the further development of these friendly relations, especially in recent years. We hope that these warm relations will continue to exist in the future."

At the end of the ceremony, King of Malaysia Sultan Abdullah Ri'ayatuddin Al-Mustafa Billah Shah  was conferred an "Honorary Doctorate Diploma in Political Science and International Relations". 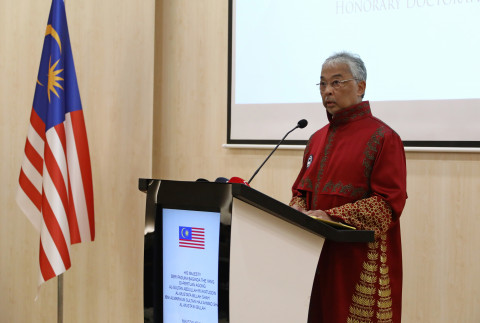 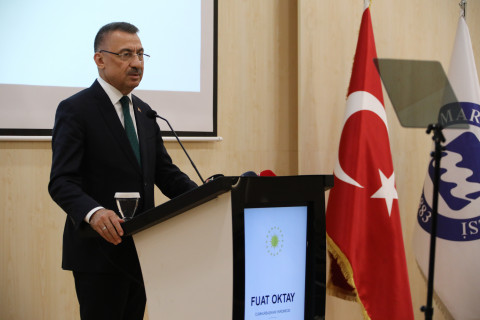 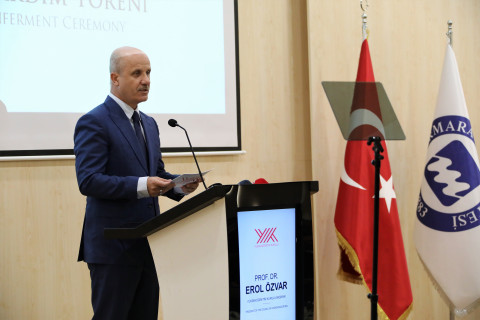 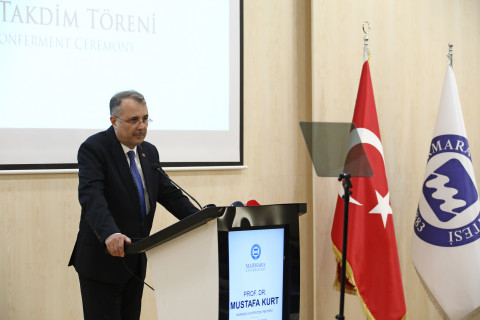 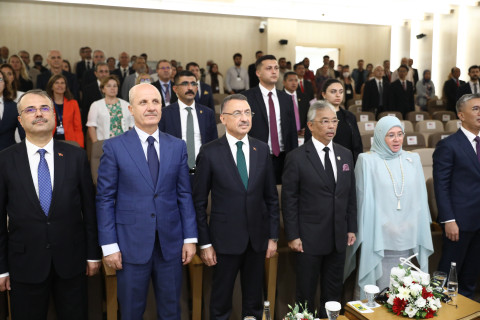 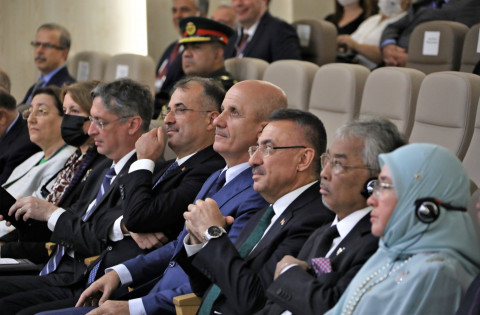 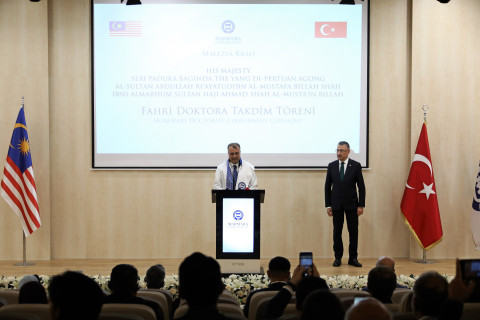 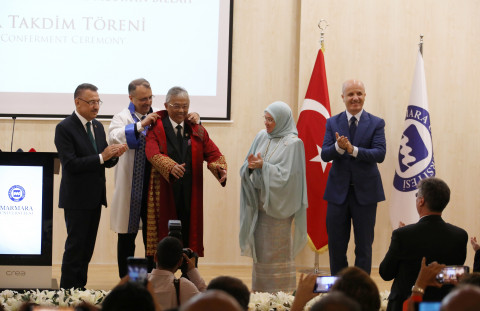 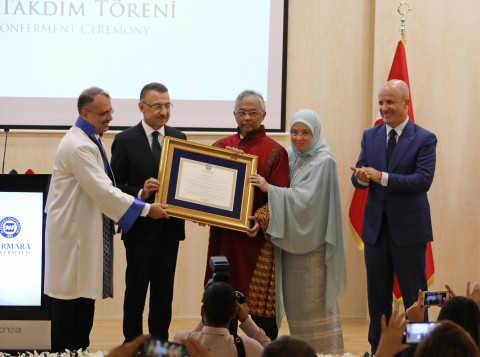 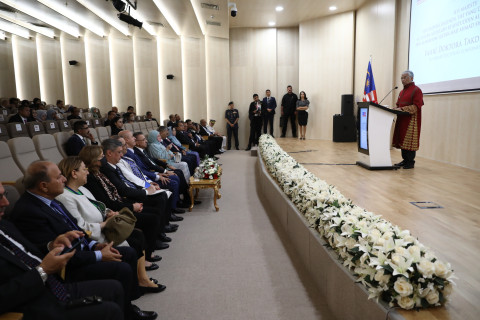 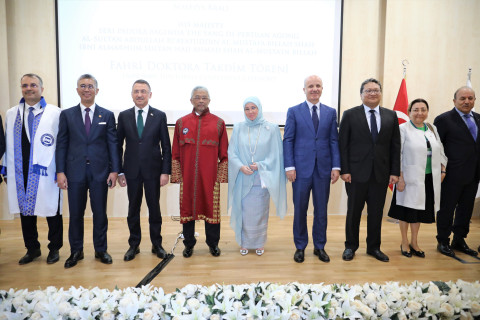 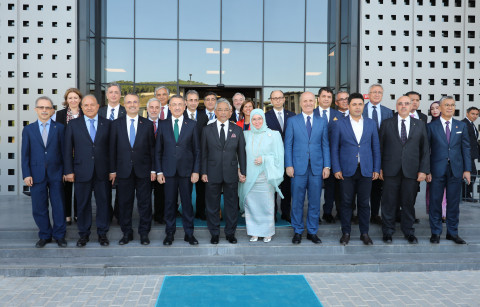 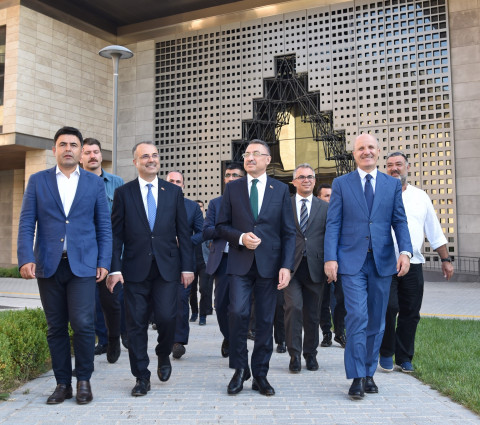 TUBITAK Project Success of the Faculty of Science Lecturers

Marmara University's Project Has Been Accepted Within the Framework of EU’s Research and Innovation  Programme Horizon Europe.