According to the Turkish Boxing Federation’s announcement,   Büşra Işıldar, who defeated Khushi of Indian in the quarter-finals (81 kg) at the Youth World Boxing Championship held in Poland, reached the final by defeating Polish Martyna Jancelewicz in the semi-final. Işıldar defeated Kseniia Olifirenko of Russia in the women’s 81-kilogram final and took the first step of the podium. Işıldar was presented her gold medal by Pınar Kuçinoğlu, Vice President of the Turkish Boxing Federation Responsible for Young Women.

Youth and Sports Minister Mehmet Muharrem Kasapoğlu congratulated the world champion Büşra Işıldar. In his congratulatory message, Kasapoğlu said: "Our national athlete Büşra Işıldar, who competed with her crescent-star jersey at the World Junior Boxing Championship in Poland, won a gold medal as the world champion and raised our breasts. I congratulate my brother Büşra for her invaluable championship. I would like to thank everyone who contributed to the training of our boxer and bringing the gold medal to our country."

Büşra Işıldar began her boxing career at the Turkey Championship, where she had her first competition in 2017. She became the champion of Turkey with four knockouts in four matches. She also participated in the European Championship held in Bulgaria in the same year and became the European Champion by winning all the matches. Işıldar continued her European championship success in Russia in 2018 and in Bulgaria in 2019.  She captured five Turkish, three European and one world championships title in total.

We congratulate our nationwide champion  Büşra Işıldar and wish her continued success. 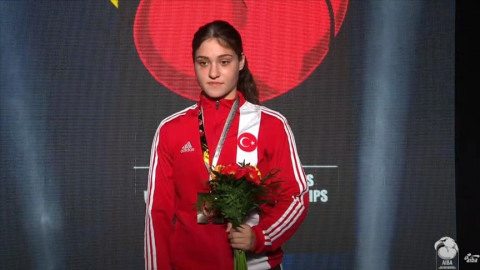