Within the scope of Marmara University In-Service Training Directive, the program on  ”Communication and Dialogue Towards Public Personnel”, prepared by the Personnel Department in accordance with the 2019-2020 training calendar,  was held in 19th November. One of our student clubs “9. Village Art Club ” performed in the event.

9th Village Art Club’s students, who presented sketches and improvisational theater performances within the scope of the training,  were hosted by Secretary General Murat Arısal on 20th November.

Secretary General Arısal welcomed the students in his office and thanked them for their taking stage in the in-service training and for the great appreciation of their play. Murat Arısal stated that our student club will be supported to create a rehearsal area on campus.

In the meeting that continued with the conversation about the art of theater, the Head of Personnel Department Tuba Biten and  Corporate Communication Coordinator Assoc. Prof.  Kübra Güran Yiğitbaşı and In-Service Training Coordinator Tekin Bozkurt were also present. After presenting his gifts to the students of the club, Murat Arısal wished that this cooperation would continue in future training programs. 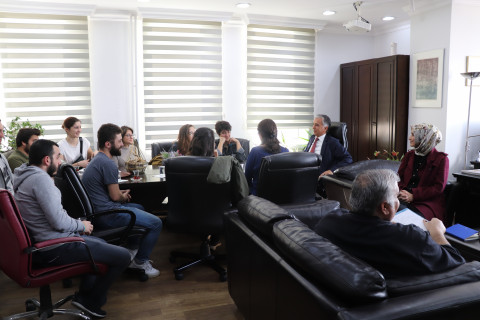